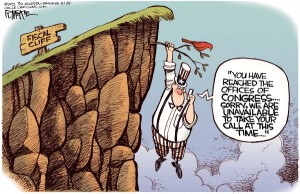 Had enough fun?  Was it more fun watching the ball drop on New Year’s Eve or watching our politicians fumble the ball all the way through to 2013 as they played with our financial futures?

The good news is, we finally have a resolution to the biggest question mark we faced heading into 2013.  While politicians hoped to have a grand bargain resolution for the overall shebang, the most we got was the urgent stop gap.  Instead of treating the gunshot patient, they merely stopped the bleeding, put some stitches in, and told him to come back in 2 months.  In any case, from the financial planning aspect, we now know what laws and taxes we have to work with and abide by.

So… what do we know?

Limits on itemized deductions starting at $250,000 in income.

Permanent fix for the AMT (Alternative Minimum Tax) which will now be indexed for inflation annually and affect people starting at $50,600 in income.

Extension and now made permanent the 0% and 15% Long Term Capital Gains and Qualified Dividends tax rates for those in the lower tax brackets.

New 20% tax rate for Long Term Capital Gains and Qualified Dividends for those in the new 39.6% Tax Bracket.

As previously discussed, those making $250,000 and above will also be subject to an additional 3.8% Tax on investment income to pay for ObamaCare.

Permanent Fix for the Death Tax.  The current $5 Million dollar exemption made permanent, which will be indexed to inflation.

Gone But Not Forgotten

The 2% Social Security Payroll Holiday was let to expire.  This was a tax cut we have enjoyed for the past 2 years.  With the lapse of this tax cut, taxes are going up on approximately 77% of the population, essentially anyone with a job.  This is estimated to cost the economy approximately $110 Billion.

The emergency unemployment benefits program has been extended for an additional year.

This bill in essence is a permanent extension of the Bush Tax Cuts for those making under $400,000, with a few much needed financial planning fixes.  This bill, by design DOES NOT address the national debt limit and the fiscal  expenditures.  This bill also DOES NOT cut any federal spending, merely increases our National Debt by $4 Trillion dollars over the next 10 years as per the CBO.  The fiscal cliff cuts in spending were pushed back 2 months.  This will coincide with when the United States is going to max out it’s credit card again (hit the debt ceiling), where we will have a real tough battle of the nerves, with both sides standing their ground.  Republicans want real spending cuts before they increase the spending limit, and Obama does not want any spending cuts tied to the increase of the spending limit.

Next Showdown will be end of February.  The sequel will then be March 27th, when the Government will be forced to shut down (maybe we will save some money, we currently spend $6 to $10 Billion dollars a day), because the Government Funding ends.

In short, the “Fiscal Cliff” was just one issue we were facing.  Congress and the White House had over a year and a half to deal with this issue, but let our government go over the cliff, and not even in the 11th hour.  This was a fairly easy problem to deal with in the grand scheme of things.  The next one will be a lot tougher, and not likely to be solved ahead of time.

I feel we have come to a crossroads where America is leaving the traditional “American Dream” and transitioning to Marxism and class warfare.  America is a broke 18 year old college student, who earns $25,000 a year, but spends $35,000 a year.  They already maxed out the American Express to over $150,000 and now they want more.  Yes… in the back of their minds they know it is a problem, the bank might come and repo their car, however the only thing the 18 year old wants is that brand spanking new iPhone 5, a new iPad 4th generation with Retina Display and that new Mac Book Pro, because that is what their friends have and he cannot afford to be seen in Starbucks with a 2 year old HP Laptop.

As a parent, when do you say enough is enough?  When is it time to smack some sense into your child?  Or do you cuddle them until before you know it the kid says I don’t care, files for bankruptcy (US Gov’t Default) and you are stuck holding the bag and your retirement now means working as a greeter at Walmart for the rest of your life?

The time to being oblivious is over, and it is important, no critical for the 300 million plus US Citizens to start paying attention to how Congress and the White House are spending their money.